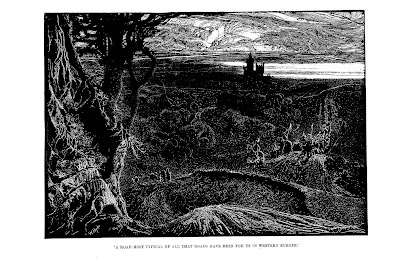 In an essay, "On Fortitude", in the Penguin edition of his Selected Essays (J. B. Morton, Editor, 1958, pp. 215-18), Belloc tells of the unusual cathedral of Périgueux, its massive, sheer stones. But it was not the Cathedral itself that he wrote of here. It was something, years later, that he recalled. He had once seen something in the Cathedral that struck him. He still remembers his being moved by what he saw, something that seems so incidental, so insignificant in itself, that he is surprised to remember it. He wondered a bit about how we could suddenly find ourselves meditating on some odd incident of our life, something that apparently made no visible difference, yet it kept coming back.


Indeed, Belloc took some time to reflect on how chance things can often change our lives It is a beautiful passage:

It has been remarked by men from the beginning of time that chance connections may determine thought: a chance tune heard in unexpected surroundings, a chance sentence not addressed perhaps to oneself and having no connection with the circumstances around, the chance sight of an unexpected building appearing round the corner of a road, the chance glance of an eye that will never meet our eyes again -- any one of these things may establish a whole train of contemplation which takes root and inhabits the mind forever.


We have no doubt that each of these items -- the tune, the sentence, the building, the glance -- were incidents in Belloc's life, things he never quite forgot.


The chance event that remained to inhabit his mind "forever", of which he writes here, took place in the very massive and strangely cupola-ed, almost Byzantine or Moorish Cathedral in this city in southwestern France, in the Department of Périgord. On the right side of the northern transept of this Cathedral -- he does not explain how he happened to be there -- there was a bare, gigantic arch with a mosaic of an Elephant under which was found the word "Fortitude". The Elephant was immense too, like the stones in the Cathedral. The Elephant, like the huge stones, seemed the perfect symbol of this virtue.


Fortitude is found there enshrined in a Christian Church because "it is one of the great virtues." What does fortitude imply? It implies "endurance: that character that we need the most in the dark business of life." Belloc reminds us that sometimes, often perhaps, the "the business of life" is "dark", unpleasant, dire. Terrible things sometimes have to be faced, have to be borne with.


Several words cluster about this notion of fortitude -- which itself means patience courage, not just courage, but patient courage. Courage itself indicates the habit by which we rule our fears and pains so that we can reach our end. This is Aristotle and Aquinas. Courage is necessarily at the basis of all the other virtues because it is directed to life itself, to existence and its preservation. But it has the connotation of a life standing for something. Courage is the opposite of cowardice. The courageous man endures; the coward gives up. If the courageous man dies, the principle for which he dies remains. If he stays alive no matter what, he stands only for himself, for an existence that means nothing but itself.


Bravery adds to courage a certain daring, a boldness in the face of a threat to life or honor. Valor means the continuous presence of bravery, the lofty quality of being brave not just once but over time in the face of many hardships and dangers. But, as St. Thomas said, the primary act of courage is not to attack but to endure, even to suffer. This does not mean that courage is a kind of silly pacifism. It means the courage of the martyr, as Josef Pieper pointed out, the one who endures what can no longer be avoided, endures in what he affirms.


Fortitude, Belloc remarked, must be not just endurance but "creative endurance." It involves some memory of a better time and some hope of its return. Belloc, we know, was a military man in his youth. He loved to follow the lines of battle, to reflect on the course of war in the very place of combat. He understood that with no fortitude, there would be no civilization. "The thing, Fortitude, is the opposite of aggressive, flamboyant courage, yet it is the greater of the two, though often it lacks action. Fortitude wears armor and holds a sword, but it stands ready rather than thrusts itself forward." The phrase "lacks action" said of fortitude needs reflection. Belloc's passage is at first sight a version of "if you want peace, prepare for war." It is also contains a sense of caution, a restraint on any untoward eagerness to "thrust forward." It contains the experience of mankind. If it uses the sword, it does so reluctantly, knowing what is at stake.


Belloc then spent a page in recounting the effects of this enduring fortitude during the dark and middle ages, when it looked like all was lost for Christendom. In the ninth and tenth centuries, with enemies on its south, east, and north, Europe should not have survived. But it did largely because of the Elephant of Périgueaux, because of Fortitude. "The West rose up again in glory, having been saved by Fortitude."


At the very end of the Twentieth Century, it seems almost eccentric to attribute anything to a virtue, to a virtue whose act is to rule our fears and our pains. Belloc did not write of arms or of strategy; he wrote of a virtue. "Fortitude does not envisage new things, rather does it tenaciously preserve things known and tried." Thus, fortitude implies that there are things worth preserving. Without this latter sense, there can be no proper fortitude, no endurance, no resistance. Fortitude for its own sake is in fact a vice. Fortitude is for a reason, for a purpose, for the highest reason and purpose of all, the reason of why we exist and what is true, of what has been handed down to us that is worth our keeping. "A whole train of contemplation that takes root and inhabits the mind forever" -- of such is the Elephant of the Périgueux Cathedral..