Gordon Rushmer is a Sussex based painter. He writes:


The opening lines of Belloc’s wonderful poem ‘The South Country’ were taught to me by my mother when I was young and, along with the other nine verses have remained with me ever since.
But I did not know then just how powerful an influence his ode to the men of Sussex would have on my work as an artist.

I have always lived close to the South Downs and despite painting scenes from around the world, it’s the Weald and hills of the South Country which remain my greatest inspiration.

Here are some more examples of Gordon's work:

WHEN I am living in the Midlands
That are sodden and unkind,
I light my lamp in the evening:
My work is left behind;
And the great hills of the South Country
Come back into my mind.


The great hills of the South Country
They stand along the sea;
And it's there walking in the high woods
That I could wish to be,
And the men that were boys when I was a boy
Walking along with me.


The men that live in North England
I saw them for a day:
Their hearts are set upon the waste fells,
Their skies are fast and grey;
From their castle-walls a man may see
The mountains far away.
The men that live in West England
They see the Severn strong,
A-rolling on rough water brown
Light aspen leaves along.
They have the secret of the Rocks,
And the oldest kind of song.


But the men that live in the South Country
Are the kindest and most wise,
They get their laughter from the loud surf,
And the faith in their happy eyes
Comes surely from our Sister the Spring
When over the sea she flies;
The violets suddenly bloom at her feet,
She blesses us with surprise.


I never get between the pines
But I smell the Sussex air;
Nor I never come on a belt of sand
But my home is there.
And along the sky the line of the Downs
So noble and so bare.


A lost thing could I never find,
Nor a broken thing mend:
And I fear I shall be all alone
When I get towards the end.
Who will there be to comfort me
Or who will be my friend?


I will gather and carefully make my friends
Of the men of the Sussex Weald;
They watch the stars from silent folds,
They stiffly plough the field.
By them and the God of the South Country
My poor soul shall be healed.
If I ever become a rich man,
Or if ever I grow to be old,
I will build a house with deep thatch
To shelter me from the cold,
And there shall the Sussex songs be sung
And the story of Sussex told.


I will hold my house in the high wood
Within a walk of the sea,
And the men that were boys when I was a boy
Shall sit and drink with me.
Posted by Hilaire Belloc at 14:12 No comments:

On the Usefulness of the New Year - Gregory Schall SJ 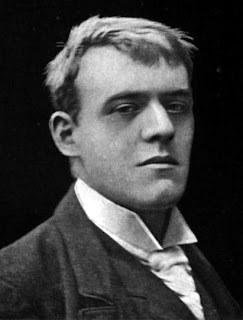 Reproduced with the kind permission of the author...

ON THE USEFULNESS OF THE NEW YEAR

Belloc remarks, in an essay entitled, "On New Years and New Moons," (The Silence of the Sea), that many different kinds of New Year's celebrations and datings can be found. Once the New Year began on "Lady's Day," March 25th. The Hebrews and the Chinese have differing dates for the New Year. Then there is the calculations that changed things a bit with establishment of the Julian and Gregorian Calendars.


But mostly, Belloc reflects, "The New Year is over-valued. Properly speaking, it is not there at all. It is a whimsy; it is an imaginary; it is a fiction of the mind; it is a convention; it is a fraud." In fact, Belloc cannot figure out why those who "object to anything that is not tangible and can be tested by experience" have not protested against the arbitrary imagination that says that the New Year begins on January 1, when it could in fact begin at any time we choose.
Belloc compares the New Year to the New Moon which he says at least is "something real." The New Moon, he continues, "hangs in the sky a tender crescent." My dictionary does not give the New Moon as the Crescent, of waxing or waning, but of the complete dark moon when its face is full to the Sun. In any case, "the New Moon is worthy of our adoration because she is real." Then Belloc adds a bit of metaphysics and epistemology, "the light on that lovely little, exiguous little, gradually brightening little arc is real, if, indeed, anything told us by our sense be real." Thus, we can hold the New Moon is real even if we cannot touch it, though our kind have touched it since Belloc wrote. Notice that Belloc, knowing about Kant, implicitly recognizes that there are those who deny that our senses can get to the real and thus must postulate the real, lest they walk about in a world that they deny exists.
But Belloc's main point is about the New Year. "I say that the New Year is a whimsy; an imaginary; a nothing." If we do celebrate it it is because it is "part of the myth-making of man." Seasons, to be sure, do change, days grow longer and shorter "after Goodwood. I wondered what this "Goodwood" was. It was not in my desk dictionary, nor in the Oxford English Dictionary. Obviously it means Midsummer's Night in some way, after which the days begin to be shorter. But here we have Belloc pointing out that something is a whimsy, yet, at the same time, that we can have rites and ceremonies about it. And what is the purpose of the rites surrounding New Year?

"A New Year has this useful thing about it, whether it be Mohammedan, Hebrew, Julian, Gregorian, Chinese, or Choctaw. It makes man remember and regret his follies and his sins." I need to point out that it is a very different thing to regret our sins and to regret our follies. The rite for dealing with the former is much better established than that dealing with the latter. Sins can be forgiven; our follies are ever forgotten. Men with few sins can have many follies, while great sinners can be relatively free of follies. Yet, Belloc reminds us, both are to be acknowledged. This passage, indeed, reminds me of a line of Chesterton who said, if I recall it correctly, that "we can be sorry for our sins but not for spilling gravy on our ties in a fine restaurant." The latter is not a sin, but it is a folly. We do regret the bad figure we cut with gravy stains on our ties.

Thus, when a man come to the end of his days, Belloc thinks, "on the downward slope" where he sees "the marble tomb," he sees on either side of him these two companions, follies and sins. "They talk to him continually." He says to himself, in my words, "Oh no! of that folly" and "God forgive me of that sin." Our follies and our sins need to be reckoned with. If we do not, "we should make very poor wayfaring with them at the end." When we do come to the end, we notice that we have lost the "other friends and fellowships." What we have left are our follies and our sins. We even strike up a conversation with ourselves, Belloc thinks, "Good morning, my dear Folly Number 8!" Then he feels his sleeve being pulled for attention, and responds, "Good-morning, Sin Number 368. Remember me to all the little sins."

I do not know whether the fact that Belloc mentions 368 sins and only eight follies is significant. I would be loathe to think that such is the proportion between follies and sins in most normal lives, though I would not be surprised. But notice that Belloc does not make New Year's Resolutions on this very arbitrary day, enhanced by much ceremonial. "I say that at the New Year we enter into preparatory companionship with our follies and our sins. Wherefore idiots on this occasion make good resolutions." Belloc thinks we had best not calculate what we might promise ourselves to do, but rather take an account of what we have done. We are better off to "make money (which lasts) or hay while the sun shines," than New Years resolutions. But of course, from Scripture, we know, as does Belloc, that money does not last, though it usually lasts longer than our good resolutions. Besides, "the sun does not shine at the New Year, and there is no hay, except what is already stacked under its thatch in the rick outside the yard."

What does this mean, that the sun does not shine on New Year and there is no hay, except that already stacked? It means that we best reckon with our follies and our sins, however many the number. Unlike our resolutions, they are real and impinge on our souls. If we do not deal with them, our good resolutions will make little difference and will only translate into further follies and sins. Thus, if the New Year is a fiction and a fancy and does not exist at all, it does not follow that the same can be said of our sins and follies, whatever their number might be.