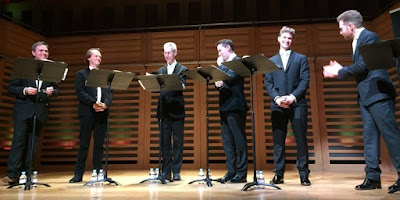 Including the music of Vaughan Williams, Ivor Gurney and Edward Elgar - the stunning sound of Opus Anglicanum's unnaccompanied voices present a retelling of Hilaire Belloc's The Four Men, in which 'Grizzlebeard', 'the Poet', 'the Sailor' and 'Myself', walk across the Weald of Sussex in the October of 1902 from Robertsbridge to Harting, with lively conversation, debate and songs along the way.


BBC Radio 4's Zeb Soanes narrates the story in the words of Belloc; the five singers perform music and include a number of Belloc’s songs sung to his own tunes.

As Belloc's The West Sussex Drinking Song helpfully tells us:

"They sell good Beer at Haslemere
And under Guildford Hill..."

.£22 + booking fee. Doors open at 6:30 and seating is unreserved. This is an intervalled performance.


Hilaire Belloc described ‘The Four Men’ as ‘A Farrago’. ‘The Four Men’ - Grizzlebeard, Myself, the Poet and the Sailor - walk across the Weald of Sussex in the October of 1902 from Robertsbridge to Harting, with lively conversation, debate and songs along the way. Published in 1911, the four figures represent aspects of Belloc’s own character. The story is in turn poetic, reflective, pompous, didactic and humorous.The narrative is the context for some richly varied music:Vaughan Williams’s ‘The Vagabond’ and ‘Linden Lea’; settings of poems by Belloc from Ivor Gurney (‘A Sussex Drinking Song’, and ‘Most Holy Night’) and from Peter Warlock (‘My own country’); and music by George Butterworth and Edward Elgar. Possibly a surprise item will be ‘Deux chœurs’ of Camille Saint-Saëns, reminding us that Belloc was half French, and had done his national service in the French artillery. Also included are a number of Belloc’s idiosyncratic songs sung to his own tunes, as described in the book itself.

Posted by Hilaire Belloc at 13:04 No comments: