The recent Walk. Film footage on You Tube...


I'm sorry to mention the recent Walk, again, but some You Tube footage of the event has emerged. Full marks to Chris Evans of Redwood TV for a first class standard of production.

Further footage will be shown by the BBC during the slot before 'Songs of Praise' (on Sunday the 16th of October). According to them 'the whole event gave a real ‘sense of place’ – that’s a BBC desire at the moment – local programming that delivers for local people… ' So there we have it.

The Walk around the Devil's Jump in Sussex... 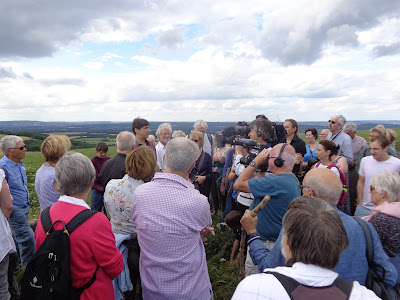 The Walk around the Devil's Jump in Sussex, on Sunday the 31st of July, was a great success.

We met at the Royal Oak pub at Hooksway just north of Chichester. A Real Pub with Real Ale located on the South Downs Way. You could easily miss it, secluded as it is in a small valley down a dead end. The pub is the only remaining part of a small village which existed on this site but was wiped out by plague as were, it seems, several other small villages in this area.

From the Royal Oak we walked the two miles or so to the Devil's Jumps. The Jumps are a series of Bronze Age burial mounds that are aligned to face the setting Sun on the Summer solstice. In fact only one of the mounds contains a burial, so the other mounds are probably ceremonial markers. This part of the Downs is steeped in folklore and literary associations: Hilaire Belloc, W.H.Hudson and Arthur Beckett all walked this way.

After a brief Talk, by the veteran Bellocian and Sussex Folk Singer Chris Hare, we recited some of Belloc's poems and sang a few Ditties. Many thanks go to Nick Flint, who is the Vicar of Rusper and author of Cautionary Pilgrim - Walking Backwards with Belloc, for weighing in with some of his own favourites from the writings of the great man. Nick is Sussex born and bred and grew up with The Four Men. During the course of writing Cautionary Pilgrim Nick discovered that he was distantly related to Mad Jack Fuller. An interesting forbear!

On our return to the pub we attempted to get served (not far shy of a hundred people) sang a few songs, exchanged stories and, amongst other things, talked about Belloc under the watchful eye of the BBC. They filmed everything and will be including some of the footage during a Programme due to be broadcast during the slot before 'Songs of Praise' (on Sunday the 16th of October). According to them 'the whole event gave a real ‘sense of place’ – that’s a BBC desire at the moment – local programming that delivers for local people… ' So there we have it.

It should be added that we blasted the Royal Oak with music and so now it's time to unashamedly plug Chris Hare's South Downs Folk Singers. Without them Sussex would be a poorer place... 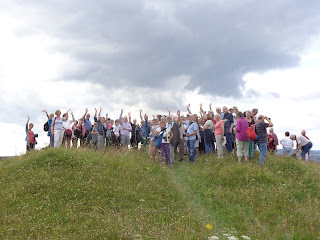 Posted by Hilaire Belloc at 14:35 No comments: