A South Downs Year - a new consideration of Belloc... 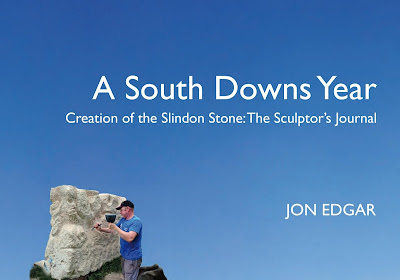 A new book has just been published. Jon Edgar’s Sculptor’s Journal records his time as the artist for a project to produce a sculpture to mark the National Trust's largest ever woodland re-planting in Slindon, West Sussex.

The stone was moved to eight different locations to engage with as many people as possible during the sculpting; 1350 people were involved in everything from a small chip to hours of work on the stone. Jon uses an unusual working method which involves ‘a raw exploration of the material’ with no pre-planning - a sort of improvisation in stone; in this case three tonnes of Portland stone.

He spent much time researching local history and unearthing figures such as Charlotte Turner Smith and William Hayley as part of being open to the local landscape informing the final work. The book reflects these researches and the process the stone went through. The artist added:

“Belloc was everywhere in connection with this landscape, who seemed to revisit the area at every opportunity. Printing the Journal seemed essential to revisit the historic material found, including a previously unpublished painting by Bessie Belloc in the Boston archive. It forms another permanent legacy to support the stone itself, rather than that material remaining in my own head.”

Posted by Hilaire Belloc at 12:14 No comments: