The veteran Bellocian Mike Hennessy has agreed to give a talk on Belloc and his parliamentary career. Mike has researched Belloc's parliamentary speeches extensively and is well placed to do so as he works at the Palace of Westminster. We look forward to what promises to be a most entertaining evening. Here are the details:

The Belloc Society is pleased to announce that Michael Hennessy will be giving a talk on Hilaire Belloc MP and his parliamentary contributions during the early part of the last century. Belloc was one of the great Catholic writers of the 20th Century.

Posted by Hilaire Belloc at 08:15 No comments: 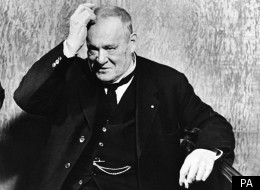 Posted by Hilaire Belloc at 13:57 No comments: 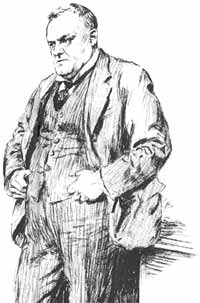 said that as the only Catholic Member in a largely populated district in South Lancashire where the Catholic vote was so large and tenacious, it would be unjust to his constituents and to some of his colleagues if he were to remain silent at the close of this debate, although it was with a certain amount of diffidence that after his remarks in Committee he rose to repeat them now on the merits of the Bill. The Catholics as a whole voted Radical at the last election, and in his opinion that general determination of the Catholic force on English politics was not likely to be easily disturbed. Speaking for himself and also for some of those whom he represented he said that they were at first, not only in sympathy with the beginning of the democratic feature which had been displayed, but they were in favour of the principles of the Bill. They knew the general temper of the English people, and although between the different sect of Protestants there were differences of opinion rather than differences of faith, they recognised that there was a national demand—he would not say mandate— for a final settlement of the education difficulty. The Catholics were, as were the Jews, an exception, and the Government had to meet them and no doubt they did all that they thought was fair to meet their claim. He entirely recognised that they did so, and from the Front Bench they had had no rancour, no spite, and not any considerable misunder-standing. Nevertheless, this Bill would leave this House that night for another place in a condition in which, he would not only say no Catholic could accede to it, but one in which no man who was pledged to maintain the Catholic schools could vote for it. He had not heard anyone explain why the chances of a Catholic child maintaining his religion should be favourable, if there were 5,000 people living in the place where it was born and unfavourable if there were only 4,999. It was a thing so illogical and false that he wondered how it came to be in the Bill at all. He was too young a Member to suggest what forces might have been at work — the English political Parties depended upon Party funds—but he would not insist. He would return to the clause as it now stood. Under it 25 per cent, of the Catholic schools were necessarily doomed. In the particular case of his own county two towns stood near to each other. The one, Protestant (even in the 16th century), would retain its Catholic schools; the other, with a strong Catholic tradition and a large Catholic population, would lose its schools. For the first had 12,000, the last under 5,000 population; nay, in the latter case a great Catholic landlord would be compelled to hand over rates not only for the support of the local Protestant school, but in order to make a school built largely out of his own money Protestant. It was possible that an act of otherwise incomprehensible folly had been committed as an incident of Party tactics. When the Bill went to the Lords no doubt a politician would say to himself, "We must give them something to bargain with. If we give them this they will let us have that." Catholics, however, did not understand those political tricks. All they would see was that one-quarter of the Catholic schools would be wiped out. And when that had permeated into the artisan constituencies of this country the promotion of the Bill would have seriously weakened the popular basis upon which the present Government stood. He did not think the position of the Liberal Party had been strengthened by the retention of such a principle as that in the Bill. If it was thought that it would be forgotten in the lapse of time hon. Members had a totally false impression of the nature of the faith of Catholics. Everywhere by that fatal error the Government had made enemies. The momentary distaste for Liberal policy would not, however, cause Catholics to throw themselves into the arms of the Conservative Party. There was a newer force arising in this country and it was already represented in the House. It was there that they would find the Catholic vote, which was not only a numerical but a moral force, represented in the future. In conclusion he must add that it was not alone as a Catholic that he expressed these views. Even if he did not hold his faith and if he wanted to represent those who sent him to Parliament he would condemn and vote against this Bill as it stood.

Posted by Hilaire Belloc at 11:31 No comments:

Epitaph on the Politician Himself by Hilaire Belloc...

Here richly, with ridiculous display,
The Politician’s corpse was laid away.
While all of his acquaintance sneered and slanged
I wept: for I had longed to see him hanged.
Another on the Same
This, the last ornament among the peers,
Bribed, bullied, swindled and blackmailed for years:
But Death’s what even Politicians fail
To bribe or swindle, bully or blackmail.
On Another Politician
The Politician, dead and turned to clay,
Will make a clout to keep the wind away.
I am not fond of draughts, and yet I doubt
If I could get myself to touch that clout.
On Yet Another
Fame to her darling Shifter glory gives;
And Shifter is immortal while he lives.
Epitaph Upon Himself
Lauda tu Ilarion audacem et splendidum,
Who was always beginning things and never ended ‘em.

Posted by Hilaire Belloc at 15:35 No comments: