The Hilaire Belloc Society has been re-founded... 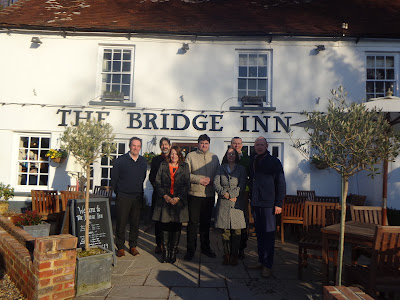 I am pleased to announce that the Hilaire Belloc has been re-founded, after having fallen into abeyance in recent years. The re-launch took place at The Bridge Inn (on Saturday the 24th of February) : a hostelry with strong Bellocian associations. The Bridge is mentioned on day five of 'The Four Men' (Belloc's literary pub crawl across Sussex). In this 'Farrago' the four featured travelling companions journeyed the twelve miles from Storrington to Duncton. Belloc, as "Myself", the narrator remarks:


"We came at last past the great chalk pit to the railway, and to the Bridge Inn which lies just on this side of the crossing of the Arun. When we had all four come into Mr. Duke’s parlour at the Bridge Inn, and ordered beer and had begun to dry ourselves at the fire, the Sailor said: ’Come, Grizzlebeard, we promised to tell the stories of our first loves when we came to Arun; and as you are much the oldest of us do you begin."

Our new Chairman is Mike Hennessy (the former Secretary). He wears many hats, one of them being Deputy Head of the Table Office in the House of Commons. As a Parliamentary Official for over twenty five years he is well placed to call us to order. He will be ably assisted by Dr Chris Hare as Vice Chairman. Chris has previously held this role. Many people, involved in Heritage projects in Sussex, will be familiar with Chris' huge contribution to our understanding of Sussex's historical identity. His wife, Ann, has written a dramatic adaptation of the Four Men which was, recently, performed all over Sussex to significant acclaim. I am very pleased to say that Anne has also joined the Committee.

It would be very remiss of me not to mention that Dr Grahame Clough, the founding Chairman of the Society, was elected Honorary President and has also volunteered his services as Treasurer. This gives us very tangible continuity with what has gone before. Grahame laboured in the vineyard for years, publishing seemingly endless editions of the The Bellocian. Most of the published material hadn't seen the light of day for a long time and a lot of the commentaries on Belloc's writings were highly original. It was, and is, a great resource for scholars wishing to deepen their understanding of his great soul and intellect.

The Society plans to hold several events in Sussex this year. We will keep you posted. In the meantime:

'The dank despisers of the Vine, arise
To watch grey dawns and mourn indifferent skies.

Forget them! Form the Dionysian ring
And pulse the ground, and Io, Io, sing.'


Posted by Hilaire Belloc at 13:28 No comments: