Never before seen letter sent by Belloc from the Reform Club... 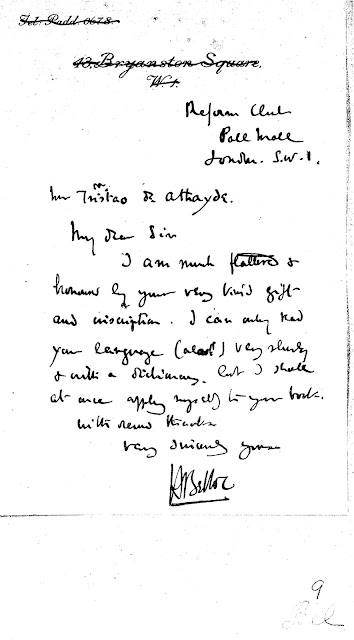 The letter, above, was kindly sent to me by a reader of the Blog in South America.

''Before converting to Catholicism Alceu was already a fond reader of G K Chesterton’s essays.Chesterton’s enthusiasm for life somehow was absorbed by his young admirer. In fact several other Brazilian intellectuals, like Gilberto Freire, were deeply influenced by GK. One of the topics that interested Alceu was distributism, much to do with a difficulty Alceu was undergoing:he had been admitted to the management of Tecidos Cometa, the family mills in Petropolis. Many of the 1.000 workers at the factory struggled to sustain their families, and the young man tended to take their side, what naturally became an issue with his father. So Alceu wrote to Chesterton and to Hilaire Belloc asking for their orientation....''

Xikito is hoping to visit England this Summer. We look forward to seeing him.