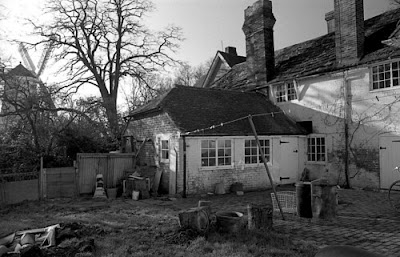 In 1985 A.N.Wilson published his biography of Hilaire Belloc. As part of his research he visited Julian Jebb (Belloc’s grandson) who was then living at Belloc’s old home, Kingsland. Wilson arrived with a BBC camera crew. Jebb allowed them full access to the house, including Belloc’s private chapel:

There are few houses in England, certainly few writers’ houses, which have a more potent atmosphere than King’s Land, with its chapel on the first floor, where he so often prayed, and where the Mass was so often said. The wall is papered with those little cards given out at Requiems, asking for prayers for the repose of the departed. And central to the chapel is the old piece of black-rimmed writing paper on which Belloc has inscribed his wife’s name. It is grimy with his frequent fingering, for he touched and kissed it as often as he prayed here.
…
The camera crew came into the house. I felt awkward about their going anywhere near the chapel, but Julian, who felt in some degree oppressed by his grandfather, as by the Catholic faith, was all the more eager to bring to that hallowed place the glare of artificial light and the intrusion of a microphone. However often they tried to make their electrical equipment in the chapel at King’s Land work, it failed. Either the lights popped, or the sound failed, usually both. The electricity of HB and of Elodie was much stronger than the electricity of the BBC. I felt, too, not merely the Bellocs, but the old Catholic Thing fighting back against the intrusion of the modern.